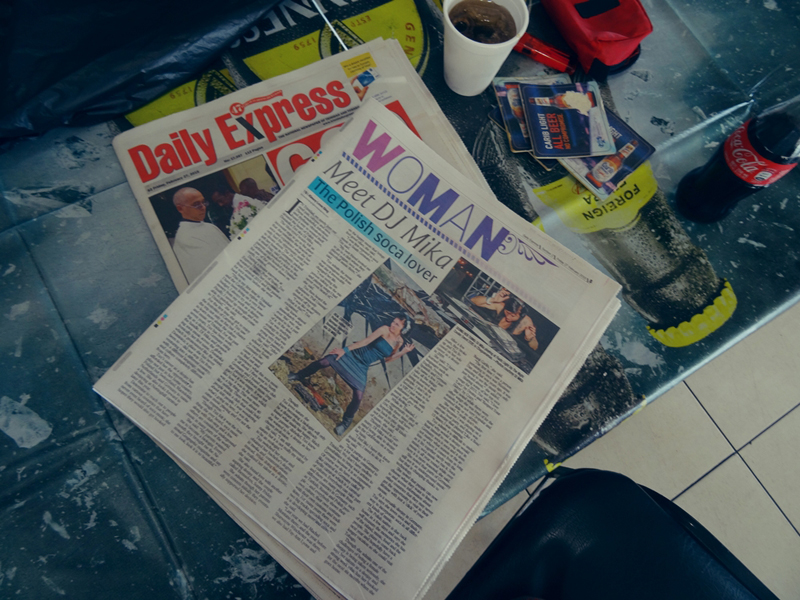 What’s Carnival in Berlin, Germany like? There’s definitely one person to ask. Mika Raguaa has been a soca DJ for Seven Years in Germany, Promoting the music across large swathes of the continent – from Macedonia to Ibiza with a growing fan base. And this is her very first Carnival at the epicenter of the global soca movement. WMN magazine caught up with her at Hotel Normandie this weekend.

Mika Raguaa (think of saying Nicaragua and you will get it) aka DJ Mika landed in Trinidad in early February to trace the roots of soca and experience first-hand the party republic That is TT. Sporting a newly tattooed on her left wrist Hummingbird, a testament to her love of TT and a cassette tattoo on her left shoulder, it is clear thatthere are few people in the world who love soca music morethan ago. Born in Poland but spending most of her life in Germany, she began her career with a partner as deejaying Sunny Friday sounds. “In Germany, we have selectors so in a sense I prefer to refer to myself as a Selectress! I literally started cutting Songs Onto cassettes back then and used to make mix tapes to impress a boyfriend or whatnot. I would make tapes of all kinds , “she says.

Her deejaying began with a mix of music but That Changed SoonAfter. “The first time I heard soca music, it was this positive Happy Feeling That I knew I wanted to only play that type of music.” The very first soca song she recalls is Rupee’s ‘Jump’. “Soca is so so collaborative – you have all thesis different artistes on one rhythm – and you have artistes collaborating on the same track and then to come here and see Bunji share the stage with Fay Ann; it’s like this King and Queen together – it’s just about love and good times. You can listen to soca When you wake up, you can listen to it When You’re going to bed, “she adds. Splitting from the Sunny Friday Partnership, she went single-handedly into soca, collecting as much music as She Could and playing at venues around Germany where soca, though niche, is growing. Will the genre ever go mainstream? She answers, “There are so many groups across Europe who hype the music – They share it passionately And They rent places and have soca parties, but I do not think we Should be waiting for soca to ‘reach’ Somewhere – It’s already out there. Maybe it can be like salsa music -. everyone knows salsa but it’s not in your face It’s okay for mainstream soca to be like that, “She Believes. Sitting on the table as we chat is a copy of ‘Governing Sound: The Cultural Politics of Trinidad’s Carnival Music’ by Jocelyne Guilbault did she just purchased at the bookshop at the hotel.

It’s clear That She studies her craft and knows it inside and out – her educational background being Media and Communication Sciences too. But yet here, she noted, she what often left to play last on some sets or what not even allowed to perform at all at a venue on Valentine’s Night in particular. “It was a little disappointing to be Given the load set. Being a female DJ I would think did all the promoters would want me in the fete! DJs here Need to THEREFORE not just stick to the popular songs. You hear ‘Like a Boss ‘six times in one set, then same from the next DJ. You have to pick the music, you have to decide and you THEREFORE have to feel the crowd, read the crowd and know what They Want. Nothing’s wrong with throwing a little chutney music in there too, “she says with a laugh! She’s been Constantly Promoting her skills downhere – running out of business cards and writing paper business cards Her Own as she taxied around TT. She even did noted in one maxi-taxi, the driver asked her where she what going with all her bags (with her CD’s and sound engineers) and she said, “I’m a DJ!” And he immediately Responded, “Are you DJ Mika!?” He had heard her set on 104.7 FM MORE earlier that week. “My maxi what pumping DJ Mika!” He Explained to her.

All good kudos for someone who hauled more CDs than clothes for her first Carnival experience. As for Carnival itself, she says, “You guys party hard in TT And the bodies – men and women are so beautiful and fit,” she notes. “For Berlin Carnival there are about ninety-six trucks totally on the road and two of Those are Exclusively soca trucks – the one at the back is always a soca truck and you find all the vibe there” Carnival is a similar but noticeably different experience there – whereby you can come in costume or simply join in the Carnival parade with your sports club etc via a tee-shirt of the same color. “It is a big parade though she adds – with Russians and Turkish and all mixes of thesis people and African music on some trucks too Mind you, some people have literally broken Their legs palancing at home!” For her first Trinidad Carnival Experience HOWEVER , she chose to play on Monday for a short time but not to play in a band for either Jouvert or Tuesday ‘pretty’ mas, “I was a vagabond!” she says excitedly, “I went for band to band, and I was on cloud nine” When not pumping soca tunes out to the European market, as Mika has another side to her DJ persona – The Bride Project.

Set apart from her Caribbean music mixes, you can find more at www.die-braut.net and even hire her for your weddings. She’s a prolific wedding DJ and she says a lot of wedding planners love that she brings a feminine edge to receptions and wedding parties – even performing in a wedding dress herself -. Cropped short though For the rest of her time in TT, she’s making contacts, soaking up the sun and living everyday here as if it’s an adventure. She’s even doing a spot of photography for something that’s coming up but we can not just yet say what it is (she swears us to secrecy!) If you would like to catch Mika on air, you have one more chance: This Monday at 1 -3 pm on 104.7 MOR FM! Tune in!